Our posts are now reported on the highly regarded FXStreet.com.

We are entering the summer period where interest and action in the markets and financials in general usually dissipates somewhat. We will continue with the weekly blog posts but the posts will be shorter than usual with a couple of weekends off. I will get back to normal posts in late August.

From last week:
“We have arrived at the 2 weeks in August which should see a reversal in trend or continuation of a move down.”

On August 18 Mars enters Virgo. This often equates to powerful market moves. We have covered Mars changing signs in some detail. Following is a daily chart of the SP500 and the red squares show when Mars entered a new sign. 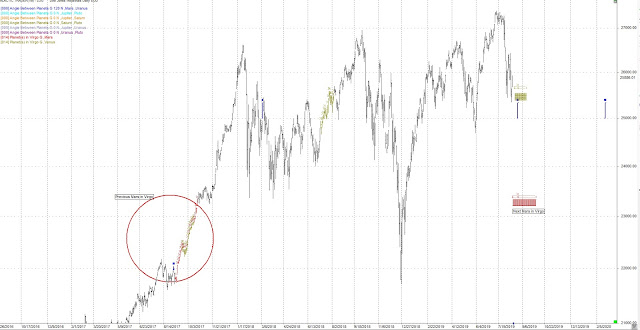 Specifically, when Mars enters Virgo the markets have a history of sharp moves both up and down. The next 3 charts show some history of Mars changing signs into Virgo. See the days where there is a number of red x’s. They are daily charts of the DJIA. 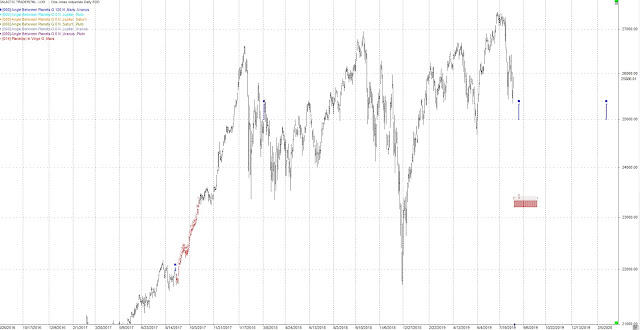 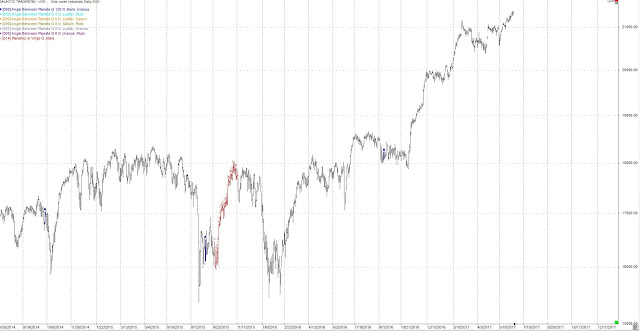 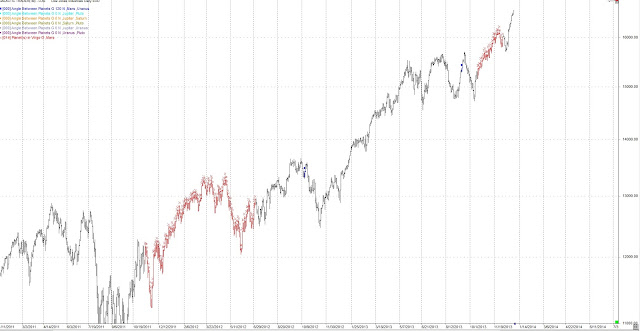 The blue squares on the chart shows the Mars / Uranus trine which occurs on August 28 and also has a history of stock market turns.

For traders, ensure you always have stop loss orders in place. Both buy and sell.

Looking at the above I would say the markets may move lower, possibly to the end of the month or early September. Aug 19 may be powerful moves in the markets.

With so many powerful aspects it is difficult to pick one date. The forces of the aspects overlap. It should however, be very volatile where one can make money or lose money fast. This does not mean I’ll answer the many questions I receive. There’s not enough time in the day.

We may get another war but I'm looking at September 9, 2020 and beyond for a major war effort. That day Mars turns retrograde while squaring the conjunction of Saturn / Pluto.

SP500
We are entering the 11th week of a new Primary cycle which started on June 3, 2019. In the current situation I am looking for a crest of the 9 week cycle which may have already had on July 26. This would be the ½ Primary cycle crest and down.

Looking at the above summary, I would say the markets may move lower possibly to the end of the month or early September. Aug 12 and Aug 19 (+- 5 tds) may both be powerful moves in the markets. It should be volatile.

The potent Sun/ Mars conjunction will be in orb from now until the end of September. This conjunction has a record of stock market reversals.

Following is an up to date chart of the SP500. I am looking at a low in late August or early September. This may change as aspects unfold in August.

Much of the market’s movement will be due to the extent of the trade wars between China and the US. 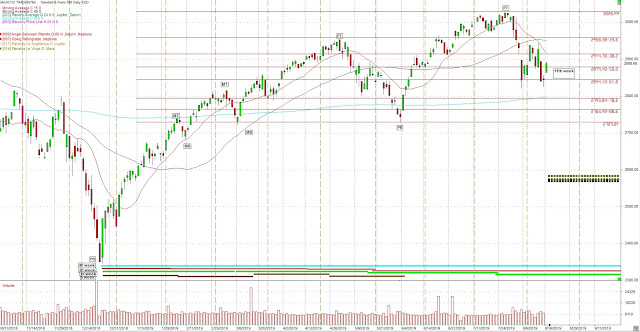 Jupiter square Neptune which we have mentioned numerous times may be the real problem as these planets in aspect can be quite inflationary. This may be pointing to serious financial problems late 2019 or early on 2020.

The Jupiter / Neptune square is still in scope and the effects are still being felt. The final exact square for Jupiter and Neptune is Sept 21. Falsehoods should be prevalent. Don't beleve what you hear. The Saturn / Pluto conjunction is also still in orb. Both will come back to exact conjunction.

Gold is entering the 12th week of the 18 week Primary cycle. This could be the 9 week cycle trough or ½ Primary cycle crest.

The Jupiter going Direct signature on Aug 11 is often associated with crests in gold prices..

The Uranus Retrograde signature is also more frequently associated with crests in gold.

Gold as well should be affected by Mars entering Virgo. Again I'm looking for this to turn Gold down. This also can be affected by geopolitical events and the battles at the FED.

We may be headed down but also watch for a big range day. 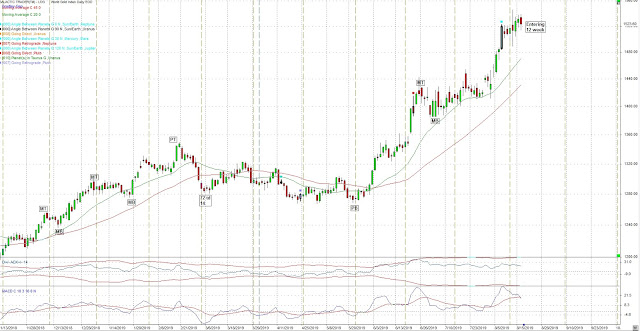 Crude may be quite volatile over the summer months and into the late summer (i.e. Sept 21, 2019). Sept 21 is the last Jupiter / Neptune square. As covered a number of times Jupiter and Neptune are co-rulers of crude and should have an effect on crude prices near the Sept 21 date.

Obviously, the price of crude will go up if relations with Iran worsen. I’m expecting a rise in crude oil price by the fall timeframe. 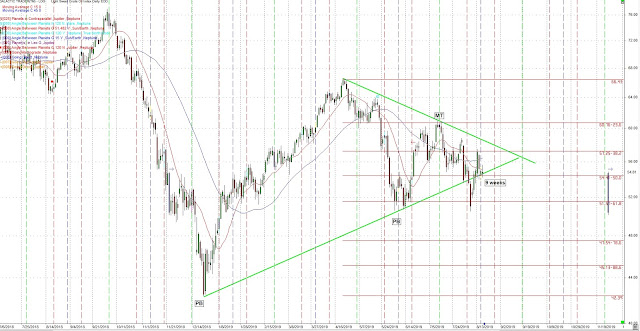