Our posts are now reported on the highly regarded FXStreet.com.

The following chart shows the geocentric Bradley indicator. It’s the red line on the daily chart of the SP500. You can search the blog to find my description of the Bradley and why we should ignore the apparent trend. It’s not accurate.

What is quite accurate are the changes in trend. I have circled that dates in blue. Note the upcoming dates (blue circles). These are all potential turn dates but ignore the direction of the red line. Give each occurrence an orb of +- 3 tds. (trading days).

The August 30 date would appear to be a reversal up. The SP500 was going up until Sept 19 the day after Saturn went direct. This was a change in short term trend. 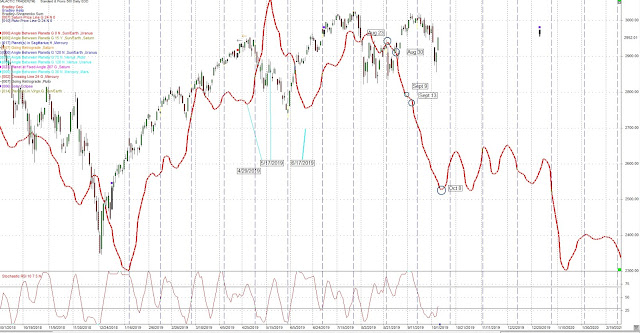 So the Bradley trend line was pointed down but price went up when looking just at the date.

Last week Pluto will turn Direct on Oct 3 after squaring Venus on Oct 1. Venus here may have an effect on currencies or financial institutions. Not to their benefit. Pluto will start moving direct by degree and minute on Oct 11.

We have been watching the Jupiter / Neptune square for some months. Sept 21 was the 3rd square. Jupiter and Neptune express a lack of self-control, unreliability, Money losses / speculators and a lack of clarity. With Saturn turning Direct on Sept 18 I will be looking for a change in outlook. Saturn will bring more structure, seriousness. Saturn will cause social order, control, law and order and more discipline. This will take a number of weeks to see the effects of Saturn turning Direct.

Expect a more serious tone in many aspects of daily life. The halcyon days of Jupiter and Neptune being in the fore are over although I would expect some follow though as we move through October.

On October 4 Mars entered Libra. This often equates to powerful market moves. We have covered Mars changing signs in some detail. Following is a daily chart of the SP500 and the red squares show when Mars entered a new sign.

The red vertical lines are the 54 cd (calendar day) cycle. 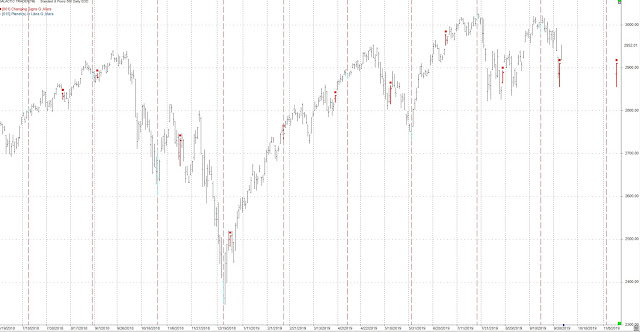 We may get another war but I'm looking at September 9, 2020 and beyond for a major war effort. That day Mars turns retrograde while squaring the conjunction of Saturn / Pluto. December 2020 is going to be a very interesting time. Much more on this as 2020 progresses.

We are entering the earthquake season. Keep an eye on the news.

It is possible we start down into early / mid October. During the month we have a number of signatures which point to a trough for the SP500. All have a history with the Primary cycle.

Saturn turning direct just 2 days before the last Jupiter / Neptune square on Sept 21.
Saturn Direct is a signature for the 50 week cycle trough. The 50 week cycle may join the current Primary cycle (18 week) and the 40 week as seen at the bottom of the SP500 chart. I am looking for a trough of all three in early to mid October.

On Oct 4 we had the Employment Situation Report. Although favorable in some other sections the Manufacturing payrolls were down by -2000. Last year this was +18000. The markets closed up on Oct 4th but I look at this as a brief move which was probably the FED stepping in on Thursday Oct 3 to prevent any significant damage.

Following is an up to date daily chart of the SP500.

Much of the market’s movement will be due to the extent of the trade wars between China and the US and on-going problems with Iran.

Notice at the bottom of the chart. The light blue line is the 39 or 40 week cycle. It is due to hit the trough around October 3rd. +- a few days. I’m looking for the Primary cycle trough early to mid Oct. 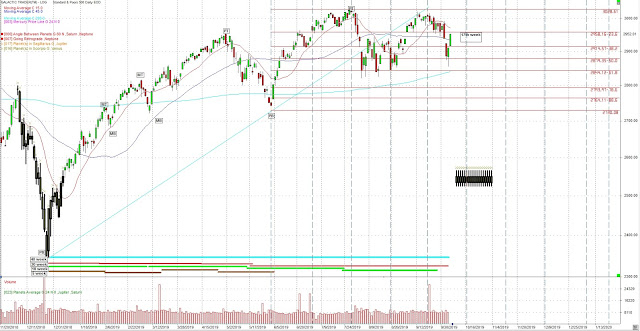 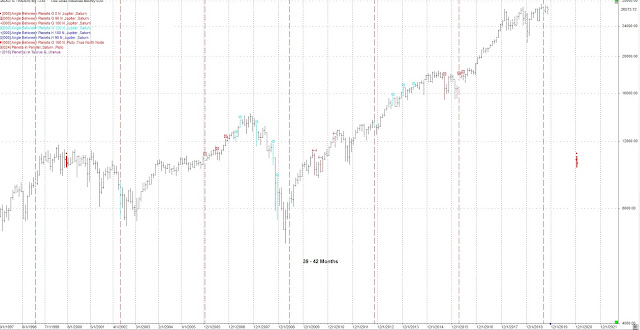 Price has now moved just above the 45 day sma and below the 15 day sma. We seem to have broken through the sideways consolidation. The light  blue line at the bottom of the chart is the
40 week cycle. It is due to go down to it’s trough along with the Primary cycle and 50 week cycle early to mid October.

Following is the envelope channel chart for the SP500. The envelope are centered moving averages. Note price made a low in August and bounced off the 20 day envelope. 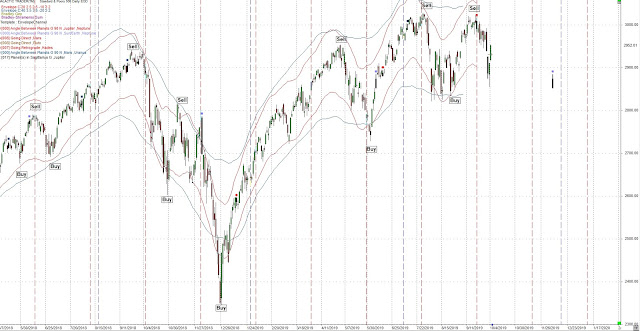 The following chart shows the SP500 chart with some of the “Uranian School” uranian points. The dark blue line across the top of the chart is Admetos. Notice how price did not break through this line. Saturn is the light blue line. The Admetos and Saturn price lines in the top right side of the chart acted as resistance and price moved down in the top right area of the chart.

If you don’t know what the Uranian School or Admetos is use google. 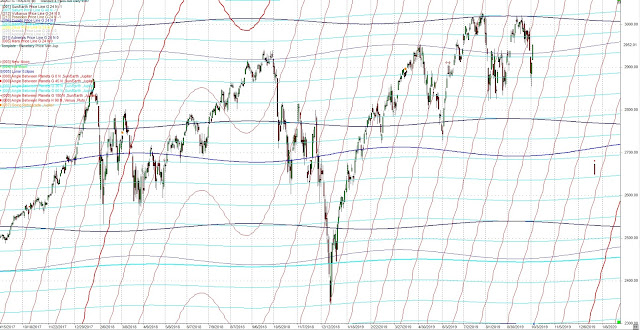 When commodities are moving with such strength it is difficult to see a turn. Price has just come down and is almost at the 15 and 45 day sma. 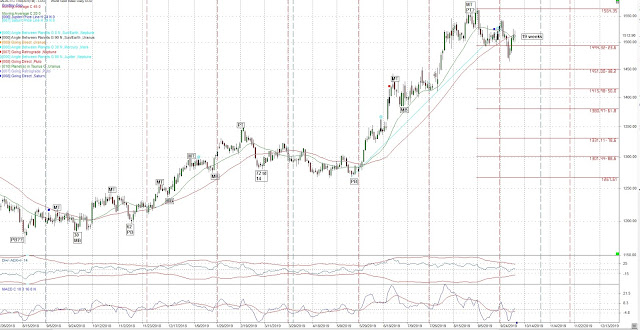 I’m looking for a trough in Gold over the next 2 weeks. In particular I’m looking at the week of Oct 7 and Oct 14th. 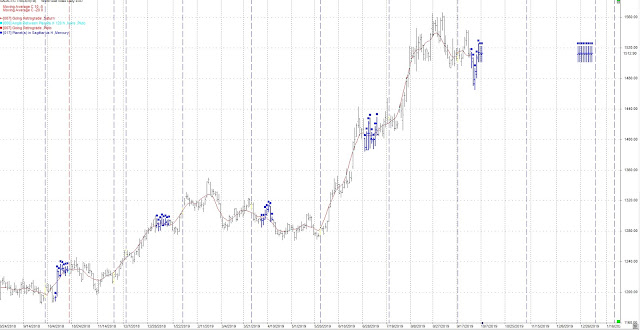 Like the SP500 Gold was affected by the Jupiter / Neptune square. Review the items listed under the SP500, lack of control etc. Untruths and unreliability will be common. The Saturn Direct signature may be signaling the Primary cycle trough for Gold. Anytime during the next two weeks.

The following daily chart for Silver shows the 108 day cycle for Silver. These are the vertical red lines. The next date would be November 5th. 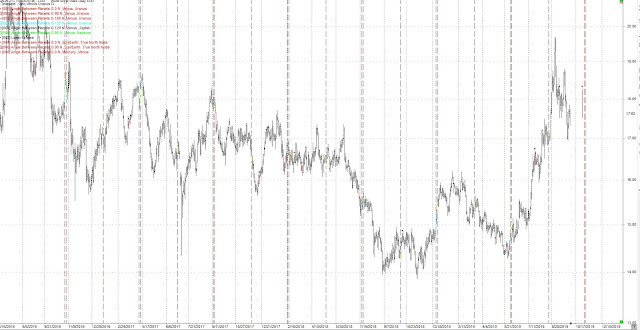 The price of crude is more dependent on geopolitical activity than any cycles or other techniques. Price has been getting support around the Fibonacci retracement at 61.8%. The point of the green symmetrical triangle saw crude price jump $6 which quickly fell back to the Fib retracement level.

From last week:
“There may be more significant moves in crude over the next week.
Crude has a dual rulership of both Jupiter and Neptune and will be directly affected by the Sept 21 Jupiter / Neptune square. As usual +- 3 tds.”

Crude may be quite volatile over this month. Obviously, the price of crude will go up if relations with Iran worsen. I’m expecting a rise in crude oil price by the fall timeframe. 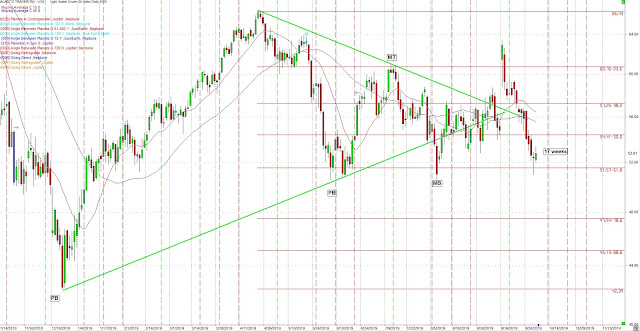 Following is the weekly Crude chart with the 17 month cycle (red vertical lines). It’s due early May 2020. 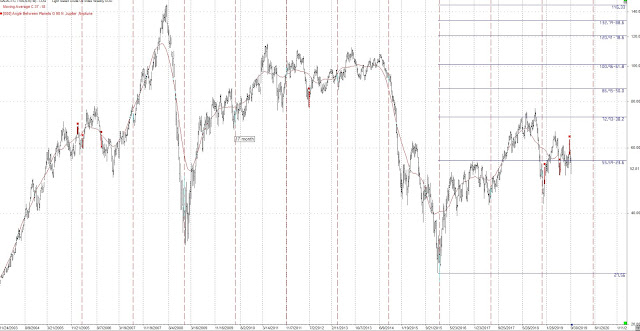 Posted by tradingdaze at 6:55 AM